I was sent this lovely Christmas card by my friend Jo and wanted to use it as inspiration for a little concertina book. The picture is by Vanessa Bowman and is called Blackbird And Churchgoers. I love blackbirds, we have lots in the garden, and I wanted to use some more winter foliage in my work this month. This card was much too precious to cut up so I selected three others to use for this simple tutorial.

I picked three cards that were a similar size but they also had the same sort of quality paper, thick and a bit like watercolour paper. I also deliberately picked cards that had some foliage on as I thought I might be able to use these images in the background, but in actual fact I only used two of the cards, discarding the one with owls.

As you can see in the picture below I then set about cutting the hare card and while doing so decided I really liked the moon and the leaping hare so would incorporate my own versions of these in my folded card as well as a blackbird!

I overlapped the back of the card (piece with Oxfam on it) with one of the faces of the other card, sticking with PVA and in the process making a good strong ‘page’. Even when making a longer folded book/card you don’t have to join all the cards in this way, but making sure some of the pages overlap ensures rigidity so that the whole thing can stand up on its own.

The piece of left over card, with the hare, sky and moon, I turned upside down and put that at the other end of the folded card so that each end is ‘shaped’. On the thinnest piece of card (the non-overlapped section, just so it would be easier to cut) I then stamped a rough holly border. I cut this out with a pair of sharp scissors, so I had a peep-through section. 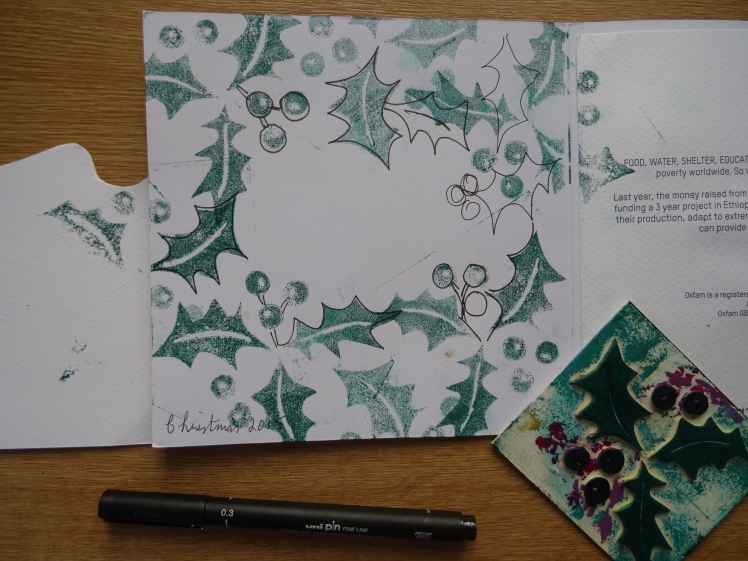 You can see below how I have crudely drawn my blackbird onto the other page where it will sit so that it can be seen through the holly border. I’ll be covering this rough drawing up with paint but it helps to do this at the planning stage. Likewise the hare and moon, just quickly drawing in their position to make sure the whole thing ‘works’. 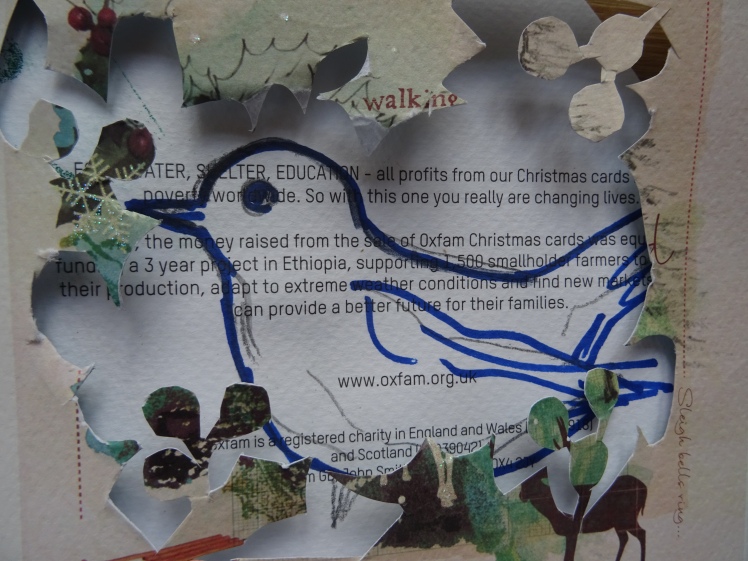 The next stage is to cover all the text, rough drawings and commercial printing with gesso. How much you cover is up to you, but it seemed to me that I needed to gently brush the areas I wanted to keep (foliage) and then go heavily over the parts I didn’t (penned blackbird). I then gathered together a small selection of papers, including ordinary tissue paper.

The tissue is very good for going over the page joins, but also adds texture to the background and helps to conceal noticeable details like the hare.  I applied it with watered down PVA but Modge Podge is ideal too. In the picture below you can see how I have combined it with the doily edge.

To the other parts I added some napkin, old wallpaper and some shiny wrapping paper that I know looks good when I print over it. I think it is a good idea to slightly run one page into the next – softens the joins and makes the decoration flow. 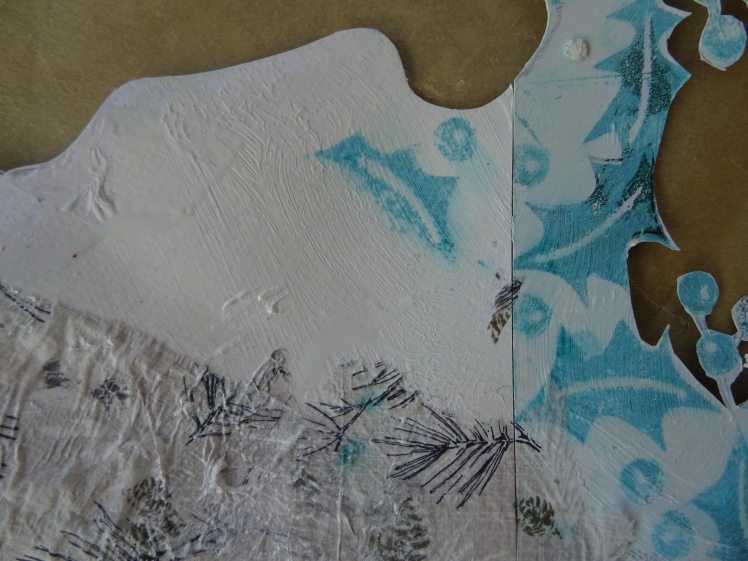 Below is how the book will look when it is folded. At all stages, keep folding the book to check that it bends easily and that the windows and shaped areas look good when laid on top of the other pages.

I still have some witness marks for my moon and hare (not planned that way) but the whole book is now ready for painting and decoration. The texture of the gesso is clear to see plus the various papers will make an interesting surface for painting (Part II). Below, for clarity, I have shown the two sides of the folded book so far. This is a very small folded book, but there is no reason to restrict the length, as long as the structure is strong enough to stand up independently. The overlapping of pages, plus the addition of the gesso, all adds to the strength of the greetings cards.